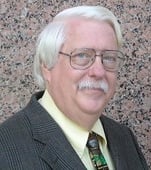 Although Donaly E. Brice was born in Austin, Texas, he grew up and went to school in Lockhart. He received a Bachelor of Science degree in education with a major in social science from Southwest Texas State College, now Texas State University. He then went to Sam Houston State University and received a Master of Arts degree with a major in history.

He taught Texas history, American history, world geography, world history and civics for several years at Mathis High School in South Texas. In 1969 he enlisted in the U.S. Navy for four years. During part of this time he was stationed in the Pentagon in Washington, D.C. and volunteered at the Smithsonian Institution where he was introduced to historical and archival research. When he was discharged from the service, he decided that he would pursue a career in research, rather than go back into teaching. He began working at the Archives Division of the Texas State Liabrary in 1977 where he worked as a Processing Archivist, Research Assistant, and, finally, the Reference Archivist for the Library - a job he held until he retired in 2003. He immediately went back to work for the Archives in a part-time capacity as Senior Research Assistant. He has recently announced his upcoming - and final - retirement.

Donaly has always had a love of Texas history, especially Caldwell County history. He attributes this, in part, to the fact that, at an early age, he remembers going out to his great-uncle's farm and learning about the historic Battle of Plum Creek which occurred on the property.

He has written or co-written four books on Texas histroy, including The Great Comanche Raid: Boldest Indian Attack of the Texas Republic. He has also written a number of historical articles that have been published in the The Plum Creek Almanac and The East Texas Historical Journal.

Over the years Donaly has presented papers and given lectures to many historical and genealogical groups throughout the State of Texas.

Legends and Life in Texas (Used)