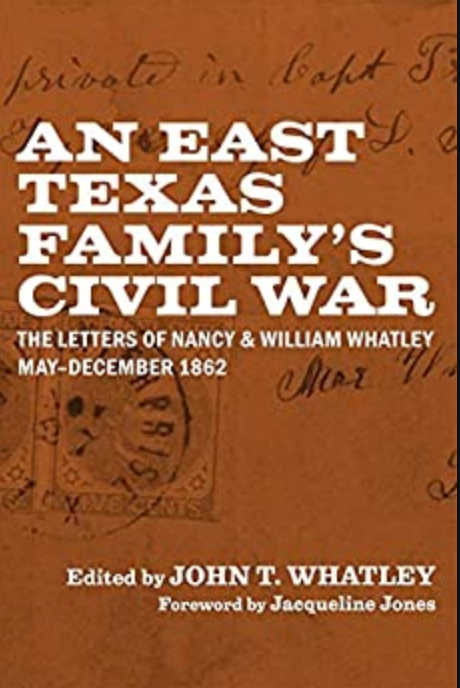 During six months in 1862, William Jefferson Whatley and his wife, Nancy Falkaday Watkins Whatley, exchanged a series of letters that demonstrate vividly the quickly changing roles for women whose husbands left home to participate in the Civil War. The Whatleys were slave owners who owned a ranch in east Texas, near the village of Caledonia in Rusk County. William Whatley enlisted with the Confederate Army in 1862, leaving his wife Nancy in charge of their cotton farm and enslaved workers. In letters to her husband, she describes in detail how she dealt with and felt about her new role. For her, the new management position in her family thrust her into an array of unfamiliar duties, including dealing with increasingly unruly slaves, overseeing the harvest of the cotton crop, and negotiating business transactions with unscrupulous white men. She also cared for her family during seemingly endless epidemics of measles and diphtheria. Her husband, hundreds of miles away, could offer only advice, sympathy, and frustration. Transcribed and annotated here for the first time by Ted Whatley (great-grandson of the Whatleys) and S. Kirk Walsh, a professional writer, the Whatley letters are notable for their descriptions of the unraveling slave ownership and accounts of southern society and Confederate loyalty collapsing under the duress of war. Nancy’s letters offer a rare window on the hardships faced by women left behind to care for their families and manage their enslaved workers and farming businesses. Her dispatches are telling as well for the way they illustrate her personal struggles and wavering support for the war.