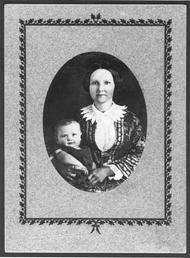 Julia Lee Sinks, pioneer settler, author, and historian, was born on January 17, 1817, in Ohio, the daughter of George and Mary (Morse) Lee. In the spring of 1840 she moved with two brothers and a sister from Cincinnati, Ohio, to settle in Austin just after Austin was selected as the capital of Texas. She married George W. Sinks, then chief clerk of the Post Office Department of the Republic of Texas. They became parents of six children. In 1848 Mrs. Sinks was at La Grange on the occasion of the burying of the victims of the Mier expedition and the Dawson massacre at Monument Hill. She was a member of the Texas Veterans Association and was a charter member, vice president, and honorary life member of the Texas State Historical Association. Soon after the founding of TSHA in 1897 she presented to it two scrapbooks containing original letters concerning the John H. Moore campaigns against the Indians and other incidents of Texas history. Besides contributing "Editors and Newspapers of Fayette County" and "Rutersville College" to the first two volumes of the Quarterly of the Texas State Historical Association, Mrs. Sinks was a frequent contributor of historical notes and items. She spent most of the last years of her life in Giddings, although in 1900 she was living in Brazoria with the family of her son-in-law James A. Cook. From her home in Giddings she sent various articles on Texas history to the Dallas Morning News and the Galveston News. She died on October 24, 1904, in Giddings and was buried in the Giddings City Cemetery. Her collection of miscellaneous documents relating to Texas history from 1837 to 1900 was presented to the University of Texas at Austin.