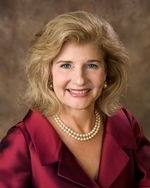 Nancy P. Paup manages and directs business, real estate, and ranching interests for both Paup Property Management, L.L.C. and Pecan Springs Ranch in Ellis County. A sixth generation Texan, she has a passionate interest in land stewardship, conservation and historical preservation. Her preservation efforts include the granting of two Texas Historical Commission Markers, including The Shawnee Cattle Trail and the Sims Family of Ellis County on the Pecan Springs Ranch.

Paup was appointed in 2013 by former Governor Rick Perry to the Board of Regents of Texas Woman’s University-Denton, Dallas, and Houston, the largest public university primarily for women in the United States. Since 2015, she has served as Chair of Academic Affairs of the Board. She also serves on the Board of Directors of the Texas State Historical Association (TSHA) at The University of Texas at Austin; the Executive Advisory Committee of The Handbook of Texas Women (TSHA); Ex-Officio Advisory Council, Center for Women’s Leadership in Business, Politics and Public Policy at Texas Woman’s University; formerly Advisory Board of the Center for Teaching Excellence, Texas A&M University.

A professional Certified Fund Raising Executive (CFRE) retired, Paup has raised funds for various institutions throughout the state of Texas. As a former member of the Board of Trustees at Schreiner University, she was involved with the recent completion of a $50M capital campaign. Paup spearheaded the membership and corporate development programs at the Amon Carter Museum of American Art in Fort Worth. In addition, she has helped raise funds for the Texas State Historical Association (TSHA).

Nancy P. Paup and her husband, Thaddeus Edgar “Ted” Paup reside in Fort Worth. They have two daughters and five grandchildren.

A Texan at Bay (Used/Signed)