Fort Lancaster was on the left bank of Live Oak Creek above its confluence with the Pecos River. It is now a state historic site off old U.S. Highway 290 ten miles east of Sheffield in Crockett County. The post was established as Camp Lancaster on August 20, 1855, by Capt. Stephen D. Carpenter and manned by companies H and K of the First United States Infantry. Camp Lancaster became Fort Lancaster on August 21, 1856. Carpenter was succeeded in command by Capt. R. S. Granger, who served from February 1856 to March 31, 1858. Carpenter resumed command after March 31 and was succeeded again by Granger in January 1859. Granger commanded until the removal of federal troops in March 1861 after the secession of Texas from the Union. During the Civil War the post was occupied from December 1861 to April 1862 by Walter P. Lane's rangers, who became a part of Company F, Second Regiment, of the Texas Mounted Rifles. After the war the fort was reoccupied in 1871 as a subpost by a company of infantry and a detachment of cavalry. Personnel changed monthly. The post was apparently abandoned in 1873 or 1874 and much of its masonry was used for buildings in Sheffield.

Fort Lancaster protected the lower road from San Antonio to El Paso in the years following the discovery of gold in California. The duties of the men stationed at Fort Lancaster were to escort mail and freight trains, pursue Mescalero Apaches and Comanches, and patrol their segment of road to keep track of Indian movements. The post was originally constructed of picket canvas and portable Turnley prefabricated buildings. By the time it was abandoned all its major structures were made of stone or adobe. The Butterfield Overland Mail changed its route west from the upper road between San Antonio and El Paso to the lower road in August 1859. Mail on the lower road had previously been contracted to George H. Giddings and John Birch. Three coaches per month passed over the road. In June of 1860 Lt. William E. Echols and his "camel corps" visited the fort (see CAMELS).

The site of Fort Lancaster was deeded to Crockett County in 1965 and donated to the Texas Parks and Wildlife Department in 1968. Archeological exploration had been begun two years earlier by T. R. Hays and Edward B. Jelks; their project involved excavating one barracks and three latrines and testing two other barracks and two commissary structures. Three structures-an officers' quarters, the commissary, and the hospital kitchen-and the flagpole location were entirely excavated in 1971 by John W. Clark. Dessamae Lorraine did additional mapping of the site and work on the flagpole site shortly after Clark's excavation. In 1974 Wayne Roberson excavated two enlisted men's barracks and two officers' quarters. The excavations produced large numbers of artifacts and a great deal of architectural information for interpreting the site. Much of this material is presented at the visitors' center at Fort Lancaster State Historic Site and in state archeological reports. Because of a budget shortfall the state yielded management of the site to Texas Rural Communities, Incorporated, in 1993. Effective January 1, 2008, operational control of Fort Lancaster State Historic Site transferred to the Texas Historical Commission.

The Old Army in Texas 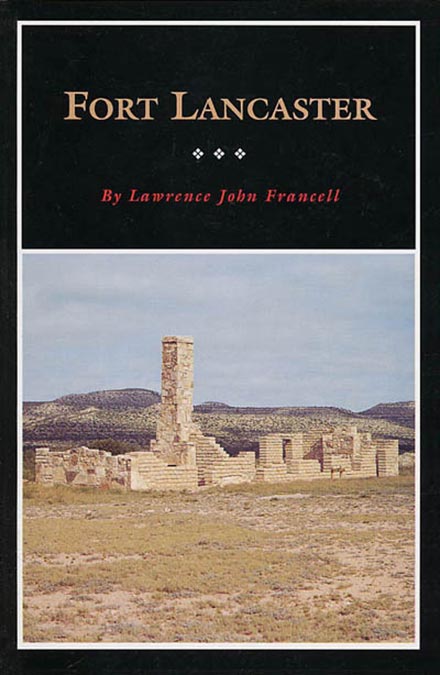