The term French Legation refers both to the diplomatic mission of Alphonse Dubois de Saligny to the Republic of Texas from 1840 to 1846 and to the house in Austin built for him in late 1840 and early 1841. The legation has frequently been referred to as the "French Embassy," but Dubois de Saligny was merely a chargé d'affaires, considerably lower than an ambassador or minister in the diplomatic hierarchy. The French government first expressed interest in recognizing the Republic of Texas in 1839, when it sent Dubois de Saligny, then a secretary in the French legation in Washington, on a mission of exploration. He stayed in Texas only briefly but wrote a strongly favorable report encouraging his government to recognize the new republic. King Louis Philippe did so on September 25, 1839, when he signed a treaty of amity, navigation, and commerce. Dubois de Saligny was promoted to chargé d'affaires and sent to establish a legation in Texas.

One of the principal objectives of Dubois's mission was the passage of the Franco-Texian bill, under which substantial portions of West Texas would be settled by French colonists. Texans at first looked favorably upon the bill, but Dubois's relations with the administration of acting president David G. Burnet began to deteriorate rapidly in early 1841. Suspicions arose that Dubois and certain French entrepreneurs would profit handsomely by the Franco-Texian bill, and matters were made worse by the so-called Pig War. In April 1841 Secretary of State James S. Mayfield requested that the French government recall its agent, but before Mayfield's letter reached Paris, Dubois asked for his passport and left Austin for good. He continued to observe affairs in Texas from New Orleans, where he stayed until March 1842.

When Sam Houston won the Texas presidential election of 1841, Dubois de Saligny hoped for better relations with the Texas government; he spent part of 1842 in Galveston and Houston. The controversies of 1841, however, had severely damaged his credibility. He took a leave of absence in 1843 and returned to France, ostensibly for reasons of health. Jules Edouard de Cramayel served as chargé d'affaires ad interim. When Dubois resumed his position in 1844, he spent most of his time in New Orleans, making only occasional visits to Houston, Galveston, and Washington-on-the-Brazos. Thinking that French interests would be better served if Texas remained independent, he encouraged Texas to seek recognition from Mexico instead of annexation to the United States. The legation was recalled in May 1846, after annexation was accomplished.

The house called the French Legation was built in Austin by Dubois de Saligny on the crest of a hill in the middle of twenty-one acres purchased from Anson Jones in 1840. Illness, bad weather, shortages of workmen and materials, and the necessity of digging a cellar delayed completion of the house until the middle of 1841. By then Dubois had left for New Orleans, so it seems unlikely that he ever occupied the house in its finished state. The carpenters who built the house apparently had worked in East Texas and possibly Louisiana, for they blended the Greek Revival, by then an American vernacular style, and Mississippi Valley French architecture. The house, made of loblolly pine from Bastrop, was raised some two feet off the ground, as if it were on a Louisiana bayou rather than in the Hill Country of Texas.

Possibly Dubois ran out of money before the house was finished. On December 31, 1840, he sold it to Father Jean Marie Odin, later the first bishop of the Catholic Diocese of Galveston. Dubois agreed to complete the house, to build a separate kitchen and stable, and to fence the property. In return, he could occupy the house until April 1, 1842. When Odin took possession on that date, the city of Austin was rapidly losing population because of the government's move to Washington-on-the-Brazos. The house remained vacant for several years, and Odin finally sold it to Gen. Moseley Baker on October 30, 1847. Baker in turn sold it on May 16, 1848, to Dr. Joseph W. Robertson, whose family kept the house for a hundred years. Around 1880 a fire destroyed the original kitchen, and the Robertsons built a new attached kitchen, dining room, and bathroom. On August 11, 1948, the house was sold to the state of Texas and placed in the custody of the Daughters of the Republic of Texas. Between 1953 and 1956 the DRT built the present stone wall around the compound, extensively landscaped the grounds, and restored the house to its 1841 appearance. This entailed not only the removal of the Robertson wing, but also the reconstruction-on extremely limited evidence-of a freestanding kitchen and stable. Raiford Stripling of San Augustine was the architect of the kitchen (1966) and the carriage house (1974), both of which were larger and fancier than the original outbuildings would have been.

The French Legation Museum opened on April 5, 1956, under the auspices of the DRT. Its contents included an armchair and sofa thought to have belonged to Dubois de Saligny, a substantial collection of Robertson family furniture ranging in date from the 1820s to the 1880s, and various donated items. The kitchen was stocked with a large number of cooking antiques, mostly French and mostly made before 1840. In the 1980s the carriage house was converted into an office, gift shop, and meeting facility. 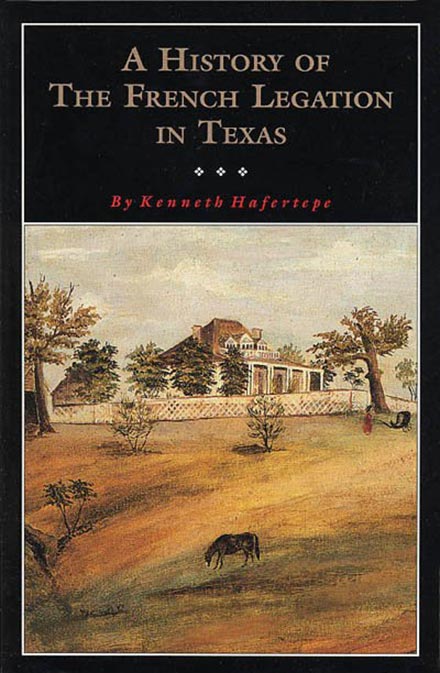