The cartographic history of Texas can be divided into five overlapping periods, based on the sources and quality of geographic data and the mapmaking technology available in each period. In the early periods prototype maps incorporating the results of recent explorations and discoveries were copied by imitative mapmakers. These copies were often less accurate than the prototype and often were still being published long after improved renditions of the territory were available.

The earliest period extends from the beginning of European activity in the New World through the end of the seventeenth century. The maps of this period were based on reports and charts from the earliest expeditions, often supplemented by information received from individual explorers and adventurers. The observations were crude, and the maps were usually compiled by mapmakers in Europe, who attempted to synthesize incomplete, vague, and often contradictory data. The resulting delineations can be related to the actual topography they depict only with great care. Typical maps of this period include those customarily attributed to Alonso Álvarez de Pineda nd Alonso de Santa Cruz, as well as those published by Abraham Ortelius and Robert Dudley. These maps generally feature a rough delineation of the Gulf Coast, a few vague rivers and inland features, an indication of the location of Indians, and sometimes a plethora of place names that can only rarely be matched to specific locations.

The second period in the cartographic history of Texas stretches from about 1700 to 1820 and coincides with the Spanish presidial and missionary activity in the region. Maps of this period were based on data from observations made by Spanish officers and explorers using the crude instruments and techniques of the era. Details on these maps are more complete than those of the previous period and can often be identified on modern maps. The place names are those assigned by Spanish colonists, missionaries, and officials and are often based on Indian names. The delineations in these maps remain impressionistic rather than precise, and their accuracy decreases as the distance from established settlements and routes increases. Typical maps of this period are those accompanying the reports of Alonso De León, Pedro Vial, José María Puelles, José Antonio Pichardo, and Francisco Álvarez Barreiro. The reports were rarely published, however; the printed maps of Guillaume Delisle, José Antonio de Alzate y Ramírez, Aaron Arrowsmith, and Alexander von Humboldt were more widely distributed. Maps of this period characteristically offer more accurate renditions of the coast than did those of the previous period; fairly complete and accurate indications of the rivers of Texas and other natural features, particularly those east of the 100th meridian; and the location of Spanish settlements and missions, Indian bands, and the routes of explorations. (see SPANISH MAPPING OF TEXAS.)

In the third period of Texas cartographic history, from roughly 1820 to 1850, accuracy of the maps of the region improved greatly. These maps were the first based on accurate and detailed surveys made for the location of land claims by settlers and performed by experienced surveyors using the most modern instruments and techniques available. The delineations were precise and accurate wherever actual surveys had taken place, but they were still plagued by errors and distortions in the unsettled and incompletely explored areas in the north and west. The archetypal map of this period was that produced and published by Stephen F. Austin in 1830; other maps of note include those by Jacob De Cordova, Henry S. Tanner, William H. Emory, John Arrowsmith, and John Disturnell. They show the progress of colonization in Texas and emerging political divisions, but they also bear witness to the relative lack of knowledge about the area west of the 100th meridian.

This brief period of great change was followed by a longer period in which maps of Texas were constructed from more precise data, derived by geodetic methods. These data resulted from detailed and exhaustive expeditions of long duration and great expense. Most of the resulting maps were products of governmental agencies, ranging from the United States Coast Survey of the 1850s through the United States Geological Survey in the closing decades of the century. The compilation by Robert T. Hill, published by the Geological Survey in 1900, is the culmination of the new mapping technology. These detailed and accurate maps revealed outlines and features recognizable to the modern observer. They were used as sources by such commercial mapmakers as George Cram and Karl Wilhelm Pressler and firms like Rand McNally that fed cartographic products to an increasingly avid market of travelers and immigrants. (see GEOLOGICAL SURVEYS OF TEXAS.)

The final period in the cartographic history of Texas extends from 1930 to the present day. It is characterized by the application of modern technology to the problem of map construction. With the advent of aerial photogrammetry in the 1930s, maps became at once more accurate and more easily produced. The evolving technologies of remote sensing, satellite mapping, and computer graphics hold the promise of ever-improved depictions.

The maps produced throughout the history of Texas reveal not only the evolution of the process itself but also the results of other activities in the region. Maps therefore illustrate the entire continuum of the Texas past in ways that other documents cannot. 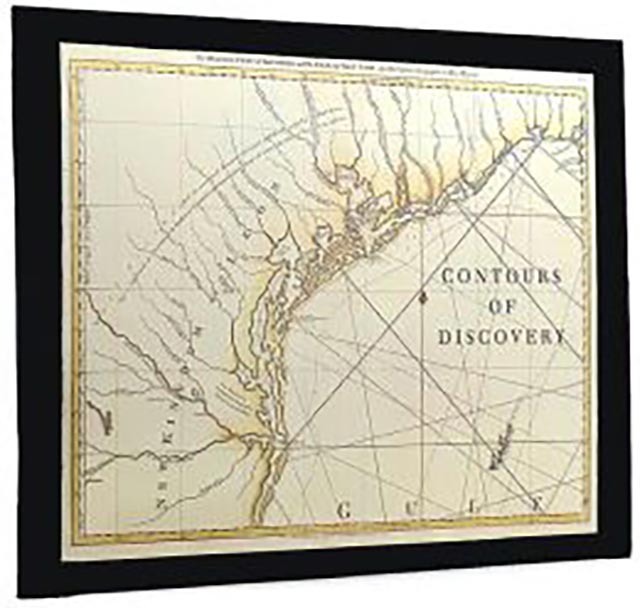