The McAllen Ranch is a working commercial cattle ranch specializing in Beefmaster cattle in the northwest corner of Hidalgo County in the Rio Grande valley, thirty-two miles northwest of Edinburg, the nearest town. The ranch's title has been held by the same family since 1790. The land, as a portion of the Santa Anita grant, was first granted to inhabitants of Nuevo Santander, or, as it was called on early maps, the Wild Horse Desert. José Manuel Gómez was an early settler living in Reynosa, Tamaulipas, one of the first towns in the area. Gómez, a native of Coahuila, first moved to Reynosa in 1777 with José de Escandón, the count of Sierra Gorda and viceroy of Nuevo Santander. Gómez occupied the Santa Anita land in 1790, made improvements on the ranch, built fences, drilled wells, and constructed houses for workers. Some of his original hand-dug water wells can still be found. He petitioned the king of Spain for the land in 1797 and received it in a formal ceremony on August 3, 1799. The Gómez grant covered 21½ leagues, or approximately 95,000 acres. There Gómez raised herds of cattle, sheep, goats, and horses and continued to aid in Spain's endeavor to colonize Nuevo Santander. He married Gregoria Ballí Domínguez, a widow with two sons; they had no more children. Life at the Santa Anita ranch was as harsh and unrelenting as in most frontier settlements, and it required sturdy, dedicated people to survive. Provisions were brought by oxcart from Reynosa and Matamoros, and salt had to be hauled from La Sal del Rey, a huge salt lake that served the entire border region. Salt for the cattle was hauled eighteen miles by horse-driven carts until the 1920s. The ranch was considered a good stopping place on the trail from the river. Many old maps before 1860 show it as an available watering place.

Salomé Ballí, great-granddaughter of Gregoria Ballí, inherited all of Santa Anita. In 1848 she married John Young, who helped her manage and expand the ranch. Young had first come to Matamoros during the Mexican War and settled in Brownsville, where he opened a general store and trading center. As opportunities arose he moved his activities upriver and acquired as much land as he could. In 1850, after Texas became part of the United States, the Bourland-Miller Commission came from Austin to verify the Spanish land grants of the area. The family presented all of the original documents to prove ownership of the Santa Anita grant, but, as the commission carried the original records back to Austin for verification, the steamer Anson sank with all of the papers. The family presented all of its remaining affidavits, but confirmation of title was delayed for some years. The validation of the Santa Anita grant was finally made in 1882 by Governor Oran M. Roberts. Hidalgo County was established in 1852, and the first recorded brand in the county records was a spur used by the Santa Anita.

In 1859 John Young died, leaving half of his estate to his wife and half to his son, John J. Young. The estate included the Santa Anita ranch and other ranching properties, including many acres along the river. Salomé Young called upon John Young's former business associate, John McAllen, to assist her in managing the holdings. McAllen was born in Londonderry, Ireland, in 1826, and immigrated to Matamoros, Tamaulipas, in 1849, on his way to California. He met John Young, who employed him as a clerk in his store in Brownsville. After a time McAllen began to pursue his own business affairs and was the first in the area to attempt to grow sugarcane commercially. He built the first sugar mill in the area in 1858.

During the Civil War, soldiers made camp near the water wells at the Santa Anita ranch. Buttons, spurs, buckles, and musket balls indicate that the campsites formed a line from La Sal del Ray to Fort Ringgold at Rio Grande City. Salomé Young participated in the war effort when she with six others gave to John S. (Rip) Ford a horse named Bravo. Rip Ford was then commander of provisional forces, Ringgold Barracks, Rio Grande City.

In 1861 McAllen and Young married and continued operating the Santa Anita and other properties together. They had a son, James Ballí McAllen, born in 1862. He and his stepbrother John Young eventually ran the ranch together with John McAllen. The Valley area during the period between 1860 and 1870 was a no-man's land. In the Nueces Strip, the area between the Nueces and Rio Grande rivers, outlaws and bandits rustled cattle that they drove to Mexico. On the Santa Anita ranch during this period more than 8,000 cattle were stolen. John McAllen claimed that "not 5 percent of the cattle are left in the County." Eventually Capt. Leander H. McNelly and the Texas Rangers came to the Valley to suppress the border bandits.

The great cattle drives began in the 1870s, and the ranch drove herds to Kansas and Indian Territory for pasturing. Steers were also sent south to meet Capt. Richard King's steamboats on the Rio Grande; however, these animals became provisions for the men on the steamboats. During this period the ranch holdings, livestock, wells, and fences were improved and increased. Various earmarks and brands-JY, YJ, and the clover leaf-were used. By 1885 John McAllen and John J. Young had consolidated the various interests held by other family members into one partnership. Together, at the peak of their holdings, they managed more than 160,000 acres.

Salomé McAllen died in 1898, and her interests were divided between her sons and her husband. Five years later a partition suit divided the Santa Anita in half. The Youngs received the eastern half, including the Santa Anita headquarters, and the McAllens took the western half, known as San Juanito. The McAllens adopted the SM brand, which has been in constant use since then. In 1923 the Youngs sold most of their interest. San Juanito became the headquarters of the McAllen Ranch, and John McAllen, with his son James, operated it until the elder McAllen's death in 1913. At the San Juanito headquarters John upgraded the livestock from longhorn to Hereford cattle and experimented with several species of exotic plants, including many varieties of grapes, citrus fruits, figs, olives, date palms, and ornamentals. He even considered raising exotic animals such as camels and ostriches.

The McAllen Ranch was passed on to James B. McAllen's four children, Mildred, Salomé, Eldred, and Argyle, in 1940. Later generations of McAllens maintained the early interest in wild-game management and conservation. Various exotic species of game animals are bred and managed on the ranch, and there is an effective program to breed and improve white-tailed deer. In 1980 the McAllen Ranch was awarded membership in the Texas Department of Agriculture's Family Land Heritage Program, which honors those families that have owned and continuously operated a farm or ranch for 100 years or more. At the time, the McAllen Ranch was the oldest in the Family Land Heritage Registry. 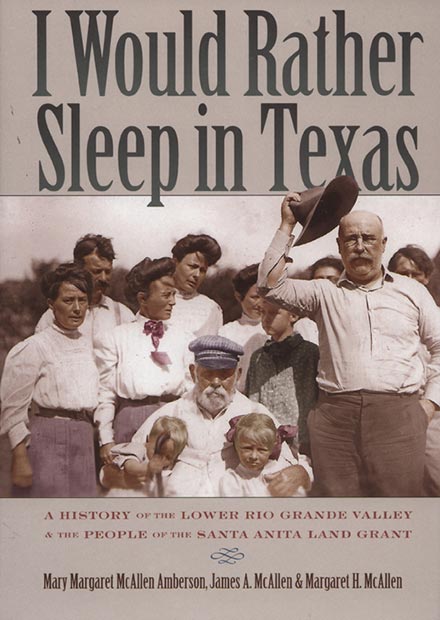 I Would Rather Sleep in Texas

James A. McAllen et al.
Save to MyTSHA Load a Random Entry Report an Error Request a Revision