As a part of the general federal relief program, a national historical records survey was undertaken in the winter of 1935 for the two-fold purpose of providing useful employment to historians, lawyers, teachers, and research and clerical workers and of preparing inventories of historical materials. The survey focused on unpublished records and documents of each governmental unit, to facilitate the administration of government; to provide data for students of political, economic, and social history; and to meet the needs of lawyers, businessmen, and other citizens who require facts from the public records for the proper conduct of their affairs. In Texas the program was initiated on March 14, 1936, with James Francis (J. Frank) Davis as state supervisor of the Federal Writers' Project and Ike H. Moore as assistant. The survey became an independent part of Federal Project No. 1 in November, when Moore was made state supervisor, with Charles W. Hodges as assistant; Davis continued as state supervisor of the Writers' Project. When Moore resigned on February 1, 1939, to become director of the newly established San Jacinto Museum of History (see SAN JACINTO MONUMENT AND MUSEUM), Hodges became state supervisor. During the late summer and early fall of 1939 a reorganization of the whole program was effected. The federal government began to require local sponsorship of the work of the historical records survey's activities, although the national government still paid the labor costs and gave over-all supervision. The survey operated from August 1, 1939, when it ceased to be a federal project, to November 1, 1939, as a separate statewide project, but still under the direction of Hodges. On November 1, 1939, the Texas historical records survey, as a unit of the Texas statewide records project, organized on October 16, 1939, and cosponsored by the Bureau of Research in the Social Sciences of the University of Texas and city and county governmental units, was established. From the national angle the program operated under the research and records section of the division of professional and service projects (later the division of community service programs) of the Work Projects Administration. The state supervisor of the Texas statewide records project (later known as the statewide records, indexing, and inventory program) was Paul E. Fidler; John W. B. Foringer, a lawyer by profession, became assistant state supervisor in charge of the historical records survey editorial unit of the Texas statewide records project on November 1, 1939, at which time Hodges became field supervisor of the statewide project. Foringer resigned on September 30, 1940, and the editorial unit was headed by the succession of clerks long associated with the work. The coming of World War II caused a slackening of the program's activities in 1941 and a discontinuance of all phases early in 1942. On March 1, 1940, Sargeant B. Child, who had been national field supervisor since the inauguration of the records survey, succeeded Luther H. Evans, who had been appointed librarian of Congress.

The scope of the survey's work in Texas included the renovation and rearrangement of more than ten million documents and 362,452 volumes; the transcription of 217,323 pages of records dating from 1731; the preparation of new name or subject indices to 1,169,762 property records and name indices to over four million birth, death, and marriage records; the preparation of new name indices to supplement the original recordings of 928,900 district and county court records; and the inventory of probate case papers for 392,450 estates as a means of assisting interested persons in finding these valuable documents. Inventories of all federal archives in Texas were compiled and published. Published inventories of state, county, and municipal archives were contemplated, but only the inventories of twenty-four Texas county archives were ever published and distributed in accordance with a national mailing list that included all major public libraries and depositories. The records of the western counties of the state were not inventoried, although the program envisioned a separate publication for each county in Texas. The inventories of the county archives published before the middle of 1940 contain a map showing the historical evolution of the county's boundary, floor plans of the county courthouse, charts depicting the evolution of county government, and a historical sketch of the county, its governmental organization, and record system. Those inventories published toward the end of the survey's operation contain merely an inventory of the records.

An inventory of church records was started, but little was ever accomplished and nothing published. Plans were developed for inventorying manuscript depositories in certain libraries and the preparation of calendars for certain collections of papers. The only work actually accomplished along this line was a transcription of a small portion of the Samuel May Williams papers in the Rosenberg Library, Galveston, the ultimate objective being the preparation of a calendar of those papers. Another phase of the work of the historical records survey was begun in Texas on August 13, 1938, when Joseph Milton Nance, a graduate student in history at the University of Texas, was employed as state supervisor of the American imprints survey to direct the inventory of public libraries in Texas for American imprints published before 1876. The national director of the program was Douglas C. McMurtrie of Evanston, Illinois, who for many years had been interested in printing in America. A national check list of titles and place locations was contemplated, and publications by states were planned and partially accomplished. After most of the field work and the preliminary editorial work had been completed, Nance resigned, and his place in the imprints survey was taken by William L. Strauss, who headed that division until the historical records-survey was discontinued in Texas, and all its files, with one exception, including field workers, copies, research notes, preliminary drafts, and edited copies were turned over to the University of Texas library. The probate records material was deposited with the San Jacinto Museum of History. The imprints file was used by Ernest W. Winkler, bibliographer at the University of Texas, who, after painstaking research, published a check list of Texas imprints, 1846–62, in the Southwestern Historical Quarterly, April 1943 to October 1948. The material in the imprints files also has been made available to Thomas W. Streeter of Morristown, New Jersey, who in 1950 was preparing a bibliography of Texas embracing the years 1796 to 1845. An inventory of newspaper publishers' files in Texas, begun in 1936, was completed by the imprints survey, and a check list of Texas newspapers to 1939, showing titles, places of publication, and location of files, was published.

While the historical records survey was a grandiose piece of work nobly conceived and one may regret that more was not achieved by the expenditure of some four or five million dollars in Texas alone over a period of five years, it must be remembered that the program was always confronted with two major handicaps: the vicissitudes of politics and the fact that 90 to 95 percent of the workers had to be taken from the relief rolls. These hindered the establishment both of an efficient corps of workers and supervisory personnel, and of a first class editorial unit for turning out publications. The program in Texas, as a whole, suffered from a lack of continuity in both leadership and personnel and was constantly widening its scope of operations rather than carrying to conclusion a given program. The program of the Texas Historical Records Survey became defunct in 1942, and the records were stored in the University of Texas Archives.

David L. Smiley, "A Slice of Life in Depression America: The Records of the Historical Records Survey," Prologue: The Journal of the National Archives, Winter 1971. Vertical Files, Dolph Briscoe Center for American History, University of Texas at Austin. 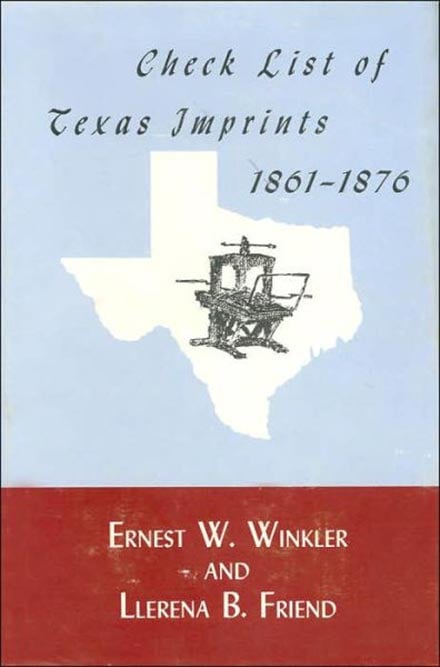