Washington-on-the-Brazos, officially named Washington, in the upper northeastern corner of what is now Washington County, was a major political and commercial center in early Texas. The town was originally named Washington and began to be called Washington-on-the-Brazos or Old Washington only after the Civil War. Washington was one mile southwest of the junction of the Brazos and Navasota rivers, where the La Bahía Road crossed the Brazos River, seventy miles northwest of Houston and nearly 200 miles up the Brazos from the coast. The major part of the original townsite is at the intersection of Farm Road 912 and Park Road 12 within Washington-on-the-Brazos State Historical Site. Washington's historic townsite also includes the section of Washington that borders Washington-on-the-Brazos at the intersection of State Highway 105 and Farm Road 1155. In 1821 Andrew Robinson's family and other members of the Old Three Hundred settled near the future townsite. By 1822 Robinson was operating a ferry at the La Bahía crossing; in 1824 he obtained a grant of a half league from the Mexican government. A settlement named La Bahía developed at the much-traveled ferry crossing. In 1831 Robinson gave one-quarter league to his daughter Patsy and son-in-law John W. Hall. Recognizing the site's commercial potential, Hall surveyed and laid out a town in December 1833, when Methodist leader John W. Kenney built its first residence. After Captain Hall bought the remainder of Robinson's grant, he established the Washington Town Company in 1835 with Dr. Asa Hoxey, Thomas Gay, and the Miller and Somervell Company to promote sales of town lots. Hoxey, a former resident of Washington, Wilkes County, Georgia, named the new town after his hometown.

By 1835 Washington had become a supply point. Attracted by its location on the river and on or near major roads, merchants and tradesmen from neighboring communities settled in the new town. Washington's commercial growth resulted from provisioning emigrants to the interior and from the surrounding area's increasing agricultural development and population. The town was elevated on bluffs above the river and had a plentiful water supply from nearby springs; its location was therefore more healthful and less flood-prone than that of settlements at the river's edge. In December 1835 Washington became Gen. Sam Houston's headquarters and the concentration point for Texas army volunteers and supplies. By 1836 the residents numbered approximately 100. To stimulate further growth, Washington businessmen offered an assembly hall without charge to attract the Convention of 1836 to their town. These town promoters rented the only structure large enough for deliberations, an unfinished building, from entrepreneur Noah T. Byars. Although the town had an inn, most delegates could not find lodging. At Washington between March 1 and March 17, 1836, delegates signed the Texas Declaration of Independence, wrote the Constitution of the Republic of Texas, and established the ad interim government. To escape Antonio López de Santa Anna's army, the Texas government and the inhabitants of Washington evacuated the town.

After the Texas victory at San Jacinto, the rapid influx of new settlers into the interior and the expanding agricultural cultivation in Washington's hinterland augmented the town's significance as a supply and transit point. The selection of Washington as county seat made the town a legal center. Abundant timber in the vicinity encouraged the development of sawmills, which began operating by 1837. A brickyard begun the same year also facilitated town construction. The Republic of Texas established a post office at Washington in 1836. In 1837 Texans from all sections attended a ball at Washington to celebrate the first anniversary of Texas independence. The town was incorporated by the Texas Congress on June 5, 1837, and reincorporated under a mayor-alderman form of city government on December 29, 1837. Hall's construction of a race track, the proliferation of gambling and drinking establishments, and a spate of furloughed Texas army veterans resulted in a disorderly environment not conducive to growth. In 1837 Rev. Z. N. Morrell established the first Missionary Baptist church in Texas at Washington. Baptist, Methodist, and Cumberland Presbyterian clergymen cooperated in 1838 against mounting lawlessness. In 1840 a revival led by R. E. B. Baylor and Rev. William Tryon ended widespread disorderly conduct and resulted in the formation of Washington's second Baptist church in 1841. Methodist missionary Robert Alexander's organization of a Methodist church in the town in 1837 and Martin Ruter's planning the Washington Circuit to promote the spread of Methodism helped make Washington a center of religious activities by 1838.

Economic growth promoted the rise of Washington as a center of education and journalism. In 1837 Mrs. John Hall began what was probably the first school in town. The Masonic lodge, chartered in 1838, sponsored the establishment of Washington Masonic Academy in 1841. By 1839 town residents numbered 250. Washington's first newspaper, the weekly Texas Emigrant, was published in 1839 and 1840; another short-lived paper, the Tarantula, appeared in 1841 and 1842. Commerce and population declined as a result of a depression in 1839, and Mount Vernon became county seat in 1841. In 1842, however, Washington became the capital of Texas. During Houston's second administration and the administration of his successor, Anson Jones, the Texas Congress, high courts, and foreign embassies moved in, and the town's economy and social life were correspondingly stimulated. Three newspapers appeared in succession—the Brazos Farmer (1843), the National Vindicator (1843–44), and the Texas National Register (1844–45). In 1844 the Washington Masonic lodge obtained a charter to replace the old lodge, which had ceased functioning in 1842. The town was the site of peacemaking between President Houston and the Indians in the summer of 1844. Jones's inauguration and inaugural ball, as well as the session of the Texas Congress that approved annexation to the United States, occurred at Washington in 1845. When Austin became capital again in the late summer of 1845 the Texas National Register also moved to Austin, and Washington lost its political significance.

The arrival of the steamer Mustang in 1842 persuaded Washington residents to develop the town, which was located near the upper limit of Brazos River navigation, as a riverport. Washington became a distribution center for commercial exchanges between the interior and the Gulf Coast. The Brazos floods of 1843–44 lowered cotton production and made navigation difficult, and Washington suffered from epidemics in 1844–45. In April 1848 town residents organized the Brazos Steamship Association to eliminate navigational obstacles. This organization bought two steamboats, the Washington and the Brazos, to initiate regular service between Washington and Velasco. From 1849 through about 1858, commerce and population in Washington increased rapidly as the town became a frequent steamboat stop and significant transit point for export of the region's profitable cotton crop. Although residents had access to merchants in Houston and Galveston, service industries catering to travelers, wholesale and retail merchandising, leather, wood, and metal fabricating, construction, and the professions flourished at this important stagecoach stop and riverport. In 1847 the Texas Ranger and Brazos Guard began publication at Washington. Establishment of an Episcopalian mission (1848) and organization of a Presbyterian church (1847) brought religious diversification. Washington Female Academy (1856–57) continued the town practice of providing education for girls. Residents organized the Brazos River Improvements Association, which held meetings in 1854 and 1856 to obtain government assistance. In 1856 the population reached 750. At the height of its development Washington had two newspapers, four churches, two hotels, a Masonic lodge, two Odd Fellows chapters, a market house, and a commercial section with brick buildings of two and three stories. Washington was also a center of Know-Nothing political activity. The Washington American, an organ of the American (Know-Nothing) party, was published there in 1855 and 1856, and the town was the site of local meetings and a state Know-Nothing convention in 1855.

In 1858 Washington refused to pay the Houston and Texas Central Railroad an $11,000 bonus to link the town to the projected rail line. The new road built to Hempstead in 1858. Construction of the Houston and Texas Central to Navasota in 1859 and of the Washington County Railroad to Brenham in 1860 accelerated the rise of these towns and the decline of Washington, which had insisted on depending on river transportation. With the increasing use of railroads, however, steamboats ceased to operate on the Brazos, and the once-prosperous riverport was doomed. Most residents moved in the 1860s to Brenham or Navasota. Many houses and the Episcopalian church building were moved to Navasota. Washington became a small supply point for the immediate vicinity. By 1884 residents numbered an estimated 175. By 1889 most of the townsite had become cultivated fields; the Presbyterian church was the only remaining church building from the era of the town's prosperity still standing in 1891. The last remaining historic structures, including a Masonic hall, burned in 1912. In 1899 Brenham schoolchildren under the leadership of superintendent E. W. Tarrant erected a monument to mark the site of Independence Hall, where the Texas Declaration of Independence was signed. In 1914 the Texas State Gazetteer and Business Directory reported that Washington had a population of 100 and listed several grocers, two general stores, a blacksmith, a physician, and a cotton gin in the town. In the 1930s the population was 230 and included two schools—one for African-Americans. The reported population remained at 300 from the 1940s through the 1960s. The schools closed by the mid-1960s when they were consolidated with Brenham. By 2000 the town of Washington was a dispersed farming community with a post office, two area churches, country cemeteries, a volunteer fire department, and a population of 265. The main activity and commerce centered around Washington-on-the-Brazos State Historic Site. The state legislature appropriated funds for a park encompassing part of the old townsite in 1915. Washington-on-the-Brazos has hosted annual celebrations of Texas independence every March 2. The Texas Centennial celebration in 1936 and the Texas Sesquicentennial celebration in 1986 were the outstanding twentieth-century events at Washington-on-the-Brazos. The Star of the Republic Museum, built in 1970, preserves many artifacts, as well as extensive historic documentation, of the nineteenth-century town, and Barrington Living History Farm at the park preserves the home of Anson Jones. The Texas Archeological Research Laboratory, in cooperation with the Texas Parks and Wildlife Department and University of Texas at Austin Texana Programs, conducted excavations at Washington-on-the-Brazos between 1964 and 1969. Their findings made possible more authentic furnishing of the restored republic-era structures. 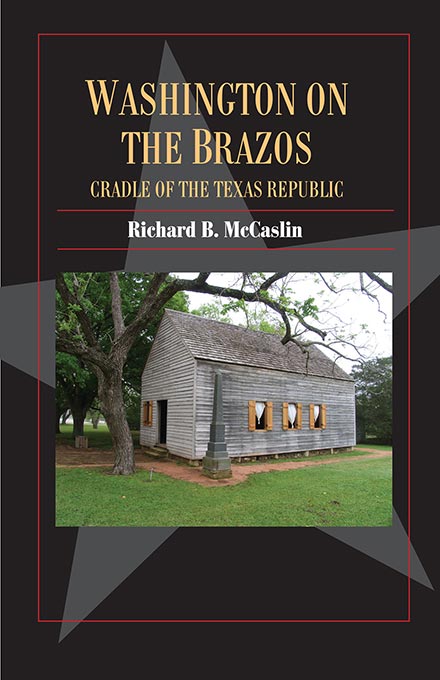 Adoption Status: ⭐
This place has been adopted and will not be available until November 6, 2022
Adopted by:
Travis Sledge