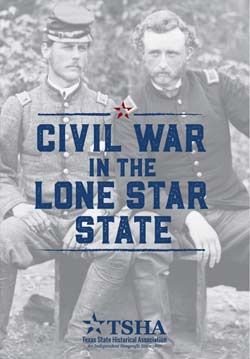 In February 1861, Texans voted overwhelmingly to secede from the Union and joined the Confederacy soon after. As a result, the Lone Star State became involved in a four-year conflict that would take the lives of many and leave none untouched. Texas escaped much of the terrible destruction of the war for a simple reason—United States troops never managed to invade and occupy the state’s interior. Nevertheless, Texans paid a huge price for the war, primarily in terms of lives lost and ruined in the Confederate Army and in the privations of families left at home.

TSHA documents the Texans involved in the conflict and the major events that took place in the state in Civil War in the Lone Star State. In this eBook, you will learn more about: