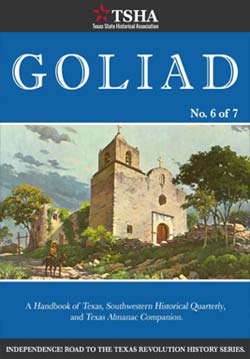 On March 27, 1836, Santa Anna ordered a mass execution of Texan revolutionary army prisoners, marking the tragic end to the Goliad Campaign of 1836. A total of 342 individuals were killed on these orders, and only a lucky few were able to escape the merciless slaughter. The lasting impact of the event is important, as Santa Anna's international reputation was damaged and United States sympathy for the revolution deepened.

TSHA documents the campaign, the execution, and the individuals involved in the sixth book in our Road to the Texas Revolution series. In the eBook, you will read: