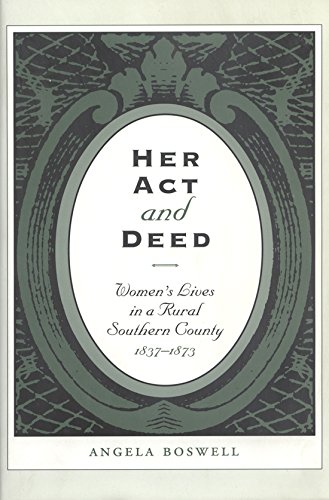 Her Act and Deed

Deeds, wills, divorce decrees, and other evidence of the public lives of nineteenth-century women belie the long-held beliefs of their public invisibility. Angela Boswell's Her Act and Deed: Women's Lives in a Rural Southern County, 1837–1873 follows the threads of Southern women's lives as they weave through the public records of one Texas county during the middle of the nineteenth century. Her unique approach to exploring women's roles in a South that spanned the frontier, antebellum, Civil War, and Reconstruction eras illuminates the truths of the feminine world of those periods, and her analysis of this set of complete public records for those years challenges the theory of men's and women's separate spheres of influence, as advanced by many scholars.