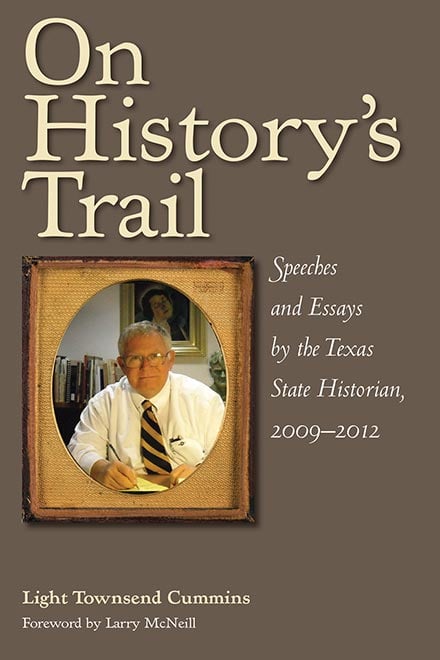 On History's Trail: Speeches and Essays by the Texas State Historian, 2009–2012

On History’s Trail: Speeches and Essays of the Texas State Historian, 2009-2012 contains twenty-nine speeches and essays from Light Townsend Cummins’s time as the State Historian of Texas, when he spoke to dozens of groups across the Lone Star State and beyond. The subjects include the settlement of Canary Islanders in Texas and Louisiana, the Red River War, Dallas sculptress Allie V. Tennant, the "hometown" of Audie Murphy, and much more. While wide-ranging in time and place, this collection emphasizes the importance of biography and the individual in Texas history, never losing the warmth and humanity that is Cummins’s hallmark. The most important point of On History’s Trail, though, is the most valuable lesson Cummins learned while State Historian: The history of Texas is alive and well today. There are more people reading and researching the history of the state than ever before. The range of topics in this volume shows the viability, breadth, and range of the state’s remarkable history.