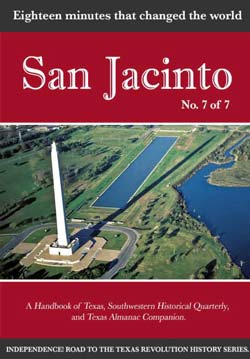 The victory of the Texans at the Battle of San Jacinto is one of the most important events in Texas history. In just eighteen minutes, the revolutionary army overwhelmed the Mexican forces. The next morning, the Texans captured Santa Anna. Less than a month later, Santa Anna and ad interim president David G. Burnet agreed to the Treaties of Velasco to effectively end the Texas Revolution and grant Texas her independence.

Discover how these pivotal eighteen minutes changed the world in San Jacinto, the seventh and final eBook in TSHA's Road to the Texas Revolution series. In the eBook, you will find: