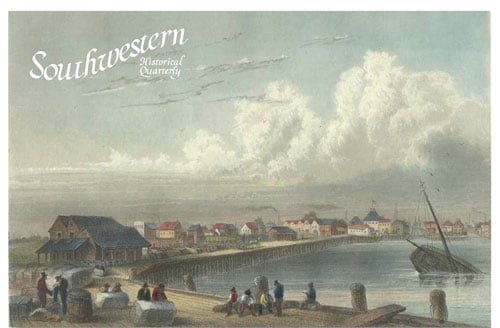 On the cover: A colorized version of a steel engraving depicting Galveston that appeared in Meyer’s Universum in 1856. The panorama was possibly executed by Swiss artist Conrad Caspar Rordorf, who is the subject of James C. Kearney’s “The Murder of Conrad Caspar Rordorf: Art, Violence, and Intrigue on the Texas Frontier,” which appears in the issue of the Southwestern Historical Quarterly. Colorized print courtesy of J. T. Koenig.

The Murder of Conrad Caspar Rordorf: Art, Violence, and Intrigue on the Texas Frontier
By James C. Kearney

When Was the Republic of Texas No More?: Revisiting the Annexation of Texas
By Keith J. Volanto, Gene B. Preuss

A Forgotten Early Account of the Great Hanging at Gainesville, Texas: P’s Letter to the Houston Tri-Weekly Telegraph, August 1863
By Hershel Parker

The Injustice Never Leaves You: Anti-Mexican Violence in Texas by Monica Muñoz Martínez
By Andrés Tijerina

A Bad Peace and a Good War: Spain and the Mescalero Apache Uprising of 1795–1799 by Mark Santiago
By Lance R. Blyth

Jefferson: Architect of American Liberty by John B. Boles
By Randolph B. Campbell

“An Arch Rebel Like Myself”: Dan Showalter and the Civil War in California and Texas by Gene C. Armistead and Robert D. Arconti
By Charles Marks

The Making of a Mexican American Mayor: Raymond Telles of El Paso and the Origins of Latino Political Power by Mario T. García
By David-James Gonzales

Born to Serve: A History of Texas Southern University by Merline Pitre
By Gene B. Preuss

Shale Boom: The Barnett Shale Play and Fort Worth by Diana Davids Hinton
By Joe Pratt

Deportation in the Americas: Histories of Exclusion and Resistance ed. by Kenyon Zimmer and Cristina Salinas
By José Angel Hernández