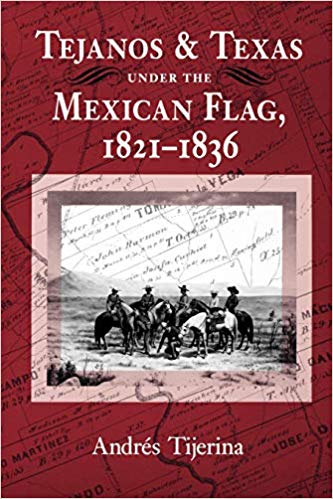 Historians have amply recorded the battles and the Anglo-Americans' military, economic, and political domination of the Mexican lands after 1836. But few studies have documented the reverse flow in the interchange while Anglo and Mexican co-existed under the Mexican flag in the previous years. Andrés Tijerina's book, focusing on Texas between 1821 and 1836, provides background facts for a better understanding of the exchange of land, power, culture, and social institutions that took place between the Anglo-American frontier and the Hispanic frontier during those critical years. To be sure, the dramatic shift in land and resources greatly affected the Mexican, but it had its effect on the Anglo American as well. After the 1820s, many of the Anglo-American pioneers changed from buckskin-clad farmers to cattle ranchers who wore boots and "cowboy" hats. They learned to ride heavy Mexican saddles mounted on horses taken from the wild mustang herds of Texas. They drove great herds of longhorns north and westward, spreading the Mexican life-style and ranch economy as they went. With the cattle ranch went many words, practices, and legal principles that had been developed long before by the native Mexicans of Texas--the Tejanos. In this book, Andrés Tijerina documents the two-way cultural exchange in the years under the Mexican flag. It describes the basic institutions of Tejano life and culture, and it documents their transmission to the Anglo-American frontier. The work is a foundation for the study of the early Mexican-American culture in Texas and its influence on Texans of all ethnic backgrounds.