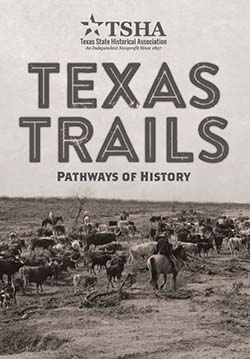 At the end of the Civil War, Texas was poised to enter the golden age of cattle trailing. With an abundance of cattle populating the state and demand rising across the country, cattle ranchers were eager to avoid depressed prices at home and earn much more outside of the state. Before long, a network of trails was established to transport cattle through Texas and across state lines. These trails remained the primary transport routes until the late nineteenth century, when railroad companies took over the transport of cattle.

Follow the journeys of the cattle drivers in Texas Trails: Pathways of History, TSHA's latest free eBook. In this eBook, you can learn more about: