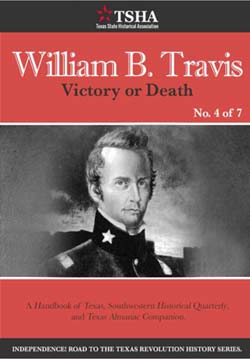 William B. Travis: Victory or Death

As the Mexican forces advanced to San Antonio, William Travis led the preparation of the Alamo for the anticipated battle against Santa Anna’s men. Travis and his garrison were vastly outnumbered and significant reinforcements were not to arrive in time for the engagement. Nonetheless, Travis led the valiant defense of the Alamo until his death by gunshot during battle.

Discover how William Travis became a Texas hero in the fourth eBook in our Road to the Texas Revolution series. In this eBook, you will read more about: